In this section, Dr. Srivastava and Dr. Greenspun describe their goals for students’ learning beyond preparing them to pass the official knowledge test for a pilot’s certificate.

Experiencing an Incredible Feat of Humankind

TINA SRIVASTAVA: Every student graduating from MIT should know how airplanes fly. It’s a really basic point of curiosity in the world, and people who come to MIT, who are very passionate and want to change the world, should know how airplanes work, some information about aviation, and this incredible feat of humankind, the fact that we’re able to fly through the air. I feel it’s really important for all students to have the opportunity to learn about airplanes and learn how to become pilots themselves. 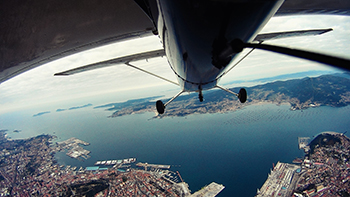 PHILIP GREENSPUN: Yes, I would agree with Tina. People have been wanting to fly for thousands of years, and only in the last hundred years has it become a practical reality. And the US is unique in that becoming a pilot costs half or a third the price and is much easier to do here than in any other country. In the US, wherever you are, you’re probably not more than half an hour or an hour’s drive from a flight school. You have the ability, as an ordinary consumer with a credit card, to spend five or ten hours mastering the basics of flying.

One thing I try to stress in the class is that you don’t have to commit to getting an FAA pilot’s certificate which will qualify you to be the only pilot in the aircraft. You can go down to a flight school, you can get your hands on the controls, and within five or ten hours you can learn to take off, fly around, and land without the instructor having to touch anything or say anything. And that’s doable for both airplanes and helicopters. So yes, our major goal is just motivating people to get up in the air and enjoy this unusual freedom that we have here in the US.

PHILIP GREENSPUN: Aviation is also a very good example of systems engineering. Flying has become very safe over the years, and that’s an engineering achievement more than anything else. So a lot of what you learn in studying aviation can be applied to other domains. A year ago, for instance, we brought in a software engineer from an avionics company, a local MIT spinoff called Avidyne, to ask students to consider how it’s possible to build software that almost never fails for use in the cockpit of the airplane, when the applications we use on phones and personal computers often crash. That’s an interesting engineering topic that we ask people to address.

TINA SRIVASTAVA: Less than half of the course is about the FAA knowledge exam. Much more of the course is about other aspects of becoming a pilot. A lot of the discussion and interaction is really focused on decision-making, which is critical for a pilot. Just because you can answer a factual question about the weather, for example, doesn’t necessarily mean you’ve fully evaluated whether it’s safe to fly, whether there are alternate options available, and so on.

For example, we have a dedicated section on night flying. If you had an engine failure at night, what would you do that would be different from how you would handle a similar situation during the day? And we provide a lot of tips and insight from our own flying experience. In the case of night flying, it can be helpful to take off before the sun has set so that you begin to acclimate to the night environment over time. These types of insights and experiences aren’t part of the FAA knowledge exam, but students tell us they’re some of the most important pieces of the course.