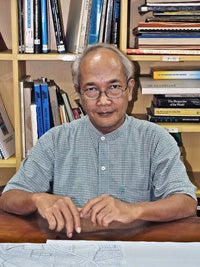 "I was amazed that a university such as MIT would freely give access to its educational information."

Triatno Yudo Harjoko has a long and close association with the University of Indonesia in Depok, Indonesia. A graduate of the institution, Harjoko has also been a professor of architecture at the school since 1979, and is currently head of the architecture department. In addition, Harjoko has designed several of the university’s buildings, including the expansive Faculty of Engineering complex, and the stunning University Mosque.

Harjoko characterizes the learning atmosphere at the University of Indonesia as primarily a one-way street, in which professors are assumed to be knowledge-bearers, and students are expected to master a predetermined knowledge base.

This approach, while typical of many Indonesian institutions, is something that Harjoko has been attempting to change in his department. Together with his colleagues, Harjoko is redesigning the teaching model, moving toward an active, student-centered learning process.

Harjoko describes the main goal in this transition as “encouraging students to learn by themselves, and to be both critical and creative.”

In the redesign process, MIT’s OpenCourseWare – to which Harjoko was introduced by a colleague several years ago – has served as an immense comparative database for Harjoko and his fellow professors. Rather than directly transposing OCW syllabi to University of Indonesia courses, Harjoko and his colleagues have been scrutinizing MIT’s courses to better understand how they were designed and developed.

“We try to understand how the MIT courses are formulated,” Harjoko explains, “and what the expected outcomes are. This gives us an important perspective on the learning process.”

Two courses for which this approach has been particularly helpful, he adds, are architectural theory and structure.

“I was amazed that a university such as MIT would freely give access to almost all of its educational information to the world,” says Harjoko. “This is important, because critical thinking and creativity demand the liberalization of learning and information. But I also believe that it’s not simply the information that’s valuable, but also the glimpse it offers into how MIT has structured its teaching and research to become such a prestigious institution.”